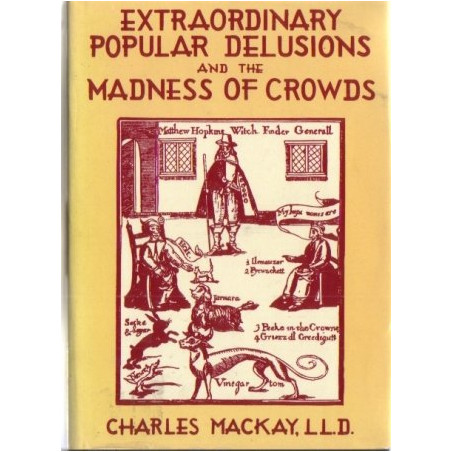 Hardbound. "One of the world's best books" - Neil Gaiman. First published in 1841, Extraordinary Popular Delusions and the Madness of Crowds is often cited as the best book ever written about market psychology. This edition includes Charles Mackay's account of the three infamous financial manias - John Law’s Mississipi Scheme, the South Sea Bubble, and Tulipomania.

Between the three of them, these historic episodes confirm that greed and fear have always been the driving forces of financial markets, and, furthermore, that being sensible and clever is no defence against the mesmeric allure of a popular craze with the wind behind it.

In writing the history of the great financial manias, Charles Mackay proved himself a master chronicler of social as well as financial history. Blessed with a cast of characters that covered all the vices, gifted a passage of events which was inevitably heading for disaster, and with the benefit of hindsight, he produced a record that is at once a riveting thriller and absorbing historical document. A century and a half later, it is as vibrant and lurid as the day it was written.

For modern-day investors, still reeling from the dotcom crash, the moral of the popular manias scarcely needs spelling out. When the next stock market bubble comes along, as it surely will, you are advised to recall the plight of some of the unfortunates on these pages, and avoid getting dragged under the wheels of the careering bandwagon yourself.

Why do otherwise intelligent individuals form seething masses of idiocy when they engage in collective action? Why do financially sensible people jump lemming-like into hare-brained speculative frenzies--only to jump broker-like out of windows when their fantasies dissolve? We may think that the Great Crash of 1929, junk bonds of the '80s are peculiarly 20th century aberrations, but Mackay's classic--first published in 1841--shows that the madness and confusion of crowds knows no limits, and has no temporal bounds. These are extraordinarily illuminating,and, unfortunately, entertaining tales of chicanery, greed and naivete. Essential reading for any student of human nature or the transmission of ideas.

In fact, cases such as Tulipomania in 1624: when Tulip bulbs traded at a higher price than gold, suggest the existence of what I would dub "Mackay's Law of Mass Action:" when it comes to the effect of social behavior on the intelligence of individuals, 1+1 is often less than 2, and sometimes considerably less than 0.