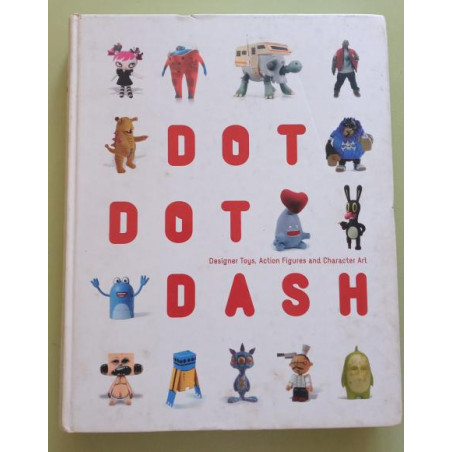 Hardbound, hard-to-find. This voluptuous volume exhibits the expansive scope of designs and objects in the ultimate compilation of contemporary character design.

Condition: vg/good+ condition, minor shelf wear, visible scratches and bumps, no DJ as issued. Not considered as a gift if you prefer it to be "like new". Suggested reading copy only because of the minor bumps. Spine and pages clean and tight.

Dot Dot Dash! is brought to you by the editors of Pictoplasma and Pictoplasma 2. Expanding on the widely popular subject of contemporary character design, this definitive volume showcases an up-to-date survey of the personalities and characters that have entered the third dimension.

Vinyl figures, plush dolls, designer toys and action figures can be seen as a new movement in contemporary design, art and popular culture. Interest in these three-dimensional toys have surged, drawing on pop culture, graffiti and visual art. The new-generation-characters appear cute, cuddly and innocuous at first, but are often elicit, subversive and politically incorrect. Not intended for child's play, they are highly esteemed by teens and adults alike. Each is a work of art, often created by world-famous artists and many of them are produced independently in limited editions and become highly sought after collectibles.

A recent trend of character applications aspiring from inherent crossovers of the character and art worlds is also taking form in sculptures and objects, creating a new art market where artists are progressively moving beyond the boundaries of the gallery and extending their work to a disparate audience.