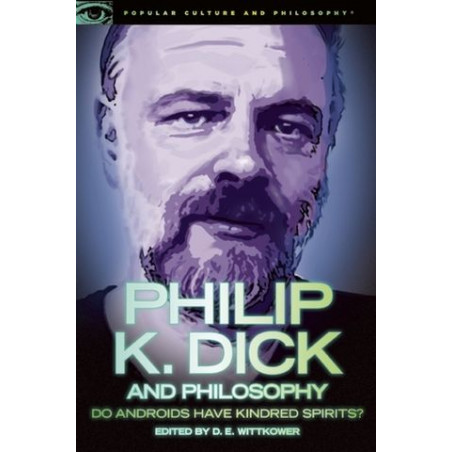 Philip K. Dick and Philosophy: Do Androids Have Kindred Spirits?

Others: All defects if any are formulated into pricing. May or may not have previous store stickers. Items were inspected to be clear but may have minor writings/inscriptions

Science fiction writer Philip K. Dick (1928-1982) is the giant imagination behind so much recent popular culture--both movies directly based on his writings, such as Blade Runner (based on the novel Do Androids Dream of Electric Sheep?), Total Recall, Minority Report, and The Adjustment Bureau plus cult favorites such as A Scanner Darkly, Imposter, Next, Screamers, and Paycheck and works revealing his powerful influence, such as The Matrix and Inception. With the much anticipated forthcoming publication in 2011 of volume 1 of Exegesis, his journal of spiritual visions and paranoic investigations, Dick is fast becoming a major influence in the world of popular spirituality and occult thinking.

In Philip K. Dick and Philosophy: Do Androids have Kindred Spirits?, thirty-four Dick fans and professional thinkers confront the fascinating and frightening ideas raised by Dick's mind-blowing fantasies. Is there an alien world behind the everyday reality we experience? If androids can pass as human, should they be given the same consideration as humans? Do psychotics have insights into a mystical reality? Would knowledge of the future free us or enslave us? This volume also includes two Dick short stories: "Beyond Lies the Wub," and "The Eyes Have It."

Philip K. Dick and Philosophy explores the ideas of Philip K. Dick in the same way that he did: with an earnest desire to understand the truth of the world, but without falsely equating earnestness with a dry seriousness. Dick's work was replete with whimsical and absurdist presentations of the greatest challenges to reason and to humanity--paradox, futility, paranoia, and failure--and even at his darkest times he was able to keep some perspective and humor, as for example in choosing to name himself 'Horselover Fat' in VALIS at the same time as he relates his personal religious epiphanies, crises, and delusions. With the same earnest whimsy, we approach Philip K. Dick as a philosopher like ourselves--one who wrote almost entirely in thought-experiments and semi-fictional world-building, but who engaged with many of the greatest questions of philosophy throughout the Euro-American tradition.

Philip K. Dick and Philosophy has much to offer for both serious fans who have read many of his novels and stories, and for those who may have just recently learned his name and realized that his work has been the inspiration for several well-known and thought-provoking films. Most chapters start with one or more of the movies based on Dick's writing. From here, the authors delve deeper into the issues by bringing in philosophers' perspectives and by bringing in Dick's written work. The book invites the reader with a casual familiarity with Dick to get to know his work, and invites the reader with little familiarity with philosophy to learn more. At the same time, we have new perspectives and challenging connections and interpretations for even the most hard-core Dick fans, even though we never speak to "insiders" only.

The book prominently addresses the most widely-known films: Blade Runner, Total Recall, Minority Report, A Scanner Darkly, and The Adjustment Bureau. Along with these "big five" films, a few chapters address his last novels, especially VALIS, which have a significant cult following of their own. There are also chapters which address short stories and novels which are currently planned for adaptation: Radio Free Albemuth (film completed, awaiting distribution), The Man in the High Castle (in development by Ridley Scott for BBC mini-series), and "King of the Elves" (Disney, planned for release in 2013).

Philosophy Goes to the Movies: An introduction to...