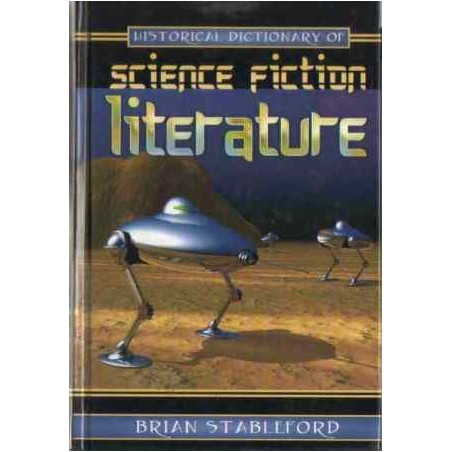 Hardbound. Inaugural volume in the Historical Dictionaries of Literature and the Arts series. This reference tracks the development of speculative fiction influenced by the advancement of science and the idea of progress from the eighteenth century to the present day.

The term "science fiction" first came into common use in the late 1920s, when it was attached to one of the many new genres spawned by the American pulp magazines during a brief period of hectic diversification. The kinds of fiction gathered under the label included those previously grouped together in Britain as "scientific romances" and certain kinds of French "contes philosophiques".

This reference tracks the development of speculative fiction influenced by the advancement of science and the idea of progress from the eighteenth century to the present day. It provides an account of the major authors of works marketed under the genre label, various subgenres perceptible within the commercial genre, significant sf magazines and their editors, and significant neologisms coined by genre writers. There are also entries on authors of works of science-based speculative fiction which were, for one reason or another, spared the indignity of the genre label, and on fields of science and technology which have been particularly prolific in provoking such speculation. The list of acronyms and abbreviations, the chronology covering the literature from the 1700s through the present, the introductory essay, and the dictionary entries provide science fiction novices and enthusiasts as well as serious writers and critics with a wonderful foundation for understanding the realm of science fiction literature. The extensive bibliography that includes books, journals, fanzines, and websites demonstrates that science fiction literature commands a massive following.

Although the greater part of science fiction literature consists of gaudy action-adventure stories, couched as planetary romances or space opera, the genre is also—and far more importantly—the only cultural enclave capable of accommodating and developing serious speculative thought regarding the future. Exercises in "non-fictional" prophecy are inevitably confounded by their own paradoxicality, while "sci-fi" movies and TV series cannot accommodate the kinds of explanatory reasoning necessary to serious extrapolation. Although individual works of science fiction tend to fall into the "prophetic trap" of representing the future as a singular actuality rather than an infinite array of potentially-realisable possibilities, science fiction literature seen as a multitudinous whole is the only intellectual artifact we have or can produce that provides an appropriate representation of our real existential situation as thinking beings whose actions shape the continual precipitation of history from the mists of possibility. This book is both a highly useful reference work and an enjoyable read.