Science slightly over the edge... In the twilight years of the 20th century, science and technology have at last caught up with the most outlandish dreams of science fiction.

Great Mambo Chicken and the Transhuman Condition explores this gray area between overheated imagination and overheated reality, introducing us to a network of scientists bent on creating artificial life forms, building time machines, hatching plans for dismantling the sun, enclosing the solar system in a cosmic eggshell, and faxing human minds to the far side of the galaxy. Following plot twists that link such unlikely intellectual bedfellows as Arthur C. Clarke, Richard Feynman, Evel Knievel, and Timothy Leary, Great Mambo Chicken gives us a riotously funny tour through some of the most serious science there is.

Meet Stanford University's Eric Drexler, father of nanotechnology, the science of molecule-size machines that can fabricate or repair literally anything; Hans Moravec, head of the Mobile Robot Lab at Carnegie-Mellon, who disdains the "wetware" of the body in favor of downloading individual human minds onto computer disks, then making backup copies; Dave Criswell, who plans to recycle the stars to increase their energy efficiency; and Bob Forward, designer of time machines, antigravity devices, and a fifth-dimensional hypervelocity space drive.

Along the way, of course, you'll want to visit the Artificial Life 4-H Show, dip into some recreational explosives, come to grips with the gray goo problem and bioinformatic bumblebees, and stumble upon a steaming coffin in a public park. Which brings us to the matter of Dora Kent's missing head, certain "problems" in the riverside county coroner's office, and the whole deliciously lurid subject of immortality through cryonic suspension. "Fin-de-siecle hubristic mania," Ed Regis calls it all, that restless urge to go where humankind has never gone before. But what exactly is this compulsion that sends some of us tinkering with the basic structure of life and the laws of physics as we hurtle toward the millennium? The answers are all in the telling of this fabulously entertaining and informative tale of science gone slightly over the edge. 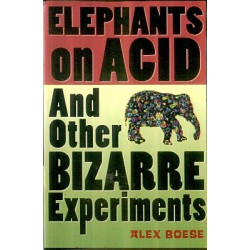 Elephants on Acid and Other...