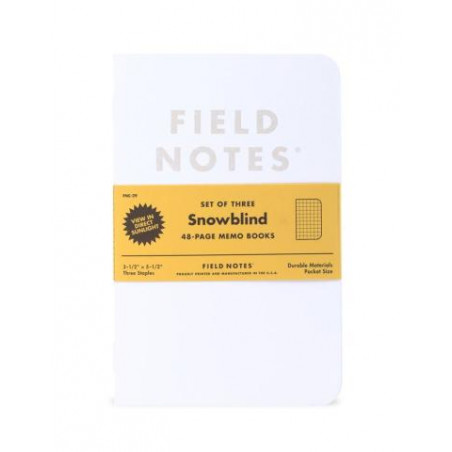 You know how when you turn your face up into the bright sunlight, even on the coldest winter day, it can totally lift your mood? Well, that's what our latest limited-edition, seasonal release is all about.

The Winter 2015 COLORS edition (our 29th) fulfills our ongoing promise to "try new things." At first glance, it's a wintry white-on-white, along the lines of our "Northerly" edition from a few years back, but take "Snowblind" out into the sunlight, and it's a whole different story.
The covers (100# Sappi McCoy Silk cover stock) are silk-screened (a COLORS first in itself) with two custom inks. The Field Notes logo is a pearlescent "interference" ink that glimmers and sparkles, and the rest of the book is coated in a nearly-magical "photochromic" ink that changes color when exposed to sunlight. Indoors, they're white, outdoors they're blue!
The body pages are 60# Finch Opaque text paper marked with a very faint gray graph, and the books are bound with glossy white staples.
ABOUT THE INKS
Both inks used in this edition were custom-mixed for us and screen-printed by H&H Graphics in Vernon Hills, Ill.
INTERFERENCE ink contains a finely-ground powder of pearlescent pigments. It's sometimes used for document security, since the effect is difficult to replicate and doesn't appear on photocopies. The reflected color varies depending on the light source and the viewing angle. In this case, the ink appears clear and glossy at first glance, but sparkles with metallic colors ranging from blue to gold when viewed at an angle.
PHOTOCHROMIC ink changes color when exposed to a specific range of ultraviolet light. The ink appears colorless indoors, but changes to blue in about 15 seconds when exposed to a strong UV source like mid-day sunlight. The color fades away in a few minutes when removed from the UV source. The change is not permanent, and can be repeated.
These UV-sensitive pigments are fairly new to market and contain some sort of precious metals and unicorn dust that make them ridiculously expensive. Ink is usually a tiny fraction of our printing costs, but we were pretty excited about these, so let's just say we took a bit of a hit in the ol' profit-margin to get 'em into the world.
USAGE TIPS
Direct sunlight works best. Most types of glass filter a great deal of UV light, so the color-change effect is greatly diminished through a window. The effect is also diminished early or late in the day when the sun passes through the atmosphere at a greater angle.
Unlike regular UV ink, Photochromic ink does not glow under a blacklight (watch video), though some blacklights (watch video), ultraviolet LEDS (watch video), and heat lamps do emit UV light and can activate the pigment.
Create temporary images and patterns on your books with stencils (watch video), household objects, plants, or photo negatives (watch video). Any object that casts an interesting shadow will work.
Long-term exposure to UV light will fade the ink and reduce the color-changing effect, so keep the books out of direct sunlight when you're not using them. 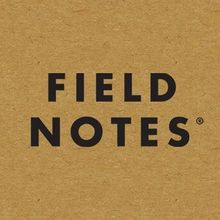 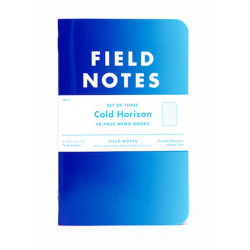